PUNKS, Goths, Mods, Skins and Rockers … sub-cultures that are still alive and kicking, decades after they developed and Carlow town is living proof of it!

Two Carlow women of different generations featured prominently in a just-aired series on RTÉ One called Mo Threibh (My Tribe), where they discussed how important music and clothes are to their identities and to their lives.

When the producers of Mo Thriebh put out a call looking for fluent Irish speakers who loved particular kinds of music, teacher Sharon Tennyson from Gaelcholáiste Cheatharlach stepped forward.

Growing up during the 1980s Carlow, Sharon and her tribe were dedicated Mods, who loved sharp-cut clothes and bands like The Jam and The Who.

Sharon has vivid memories of hanging out with fellow Mods Adrian Townsend and the late Michel Curran (pictured) and going to gigs in Archie’s, Carlow’s famous music venue.

“I was a Mod back in the mid-1980s. We didn’t follow the fashion of the day; we listened to northern soul and bands like The Jam, The Who and The Small Faces. We looked different, we had our own niche, our own tribe,” recalls Sharon. 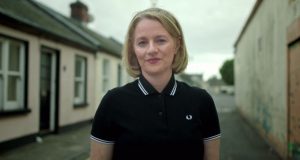 On the programme, she, along with Mick Sweeney and Linda Shackleton, told of how the scene provided a great escape from the daily stresses of life and a great opportunity to make new friends.

Another person who has her own sub-pop gang is 18-year-old Ruth Ní Cheallaigh, a leaving cert student who attends Gaelcholáiste Cheatherlach where Sharon teaches.

Ruth’s Gothic looks and fluent Irish were perfect for Mo Threibh. Her story featured on the last of the four-part series, which aired last night on RTÉ.

Being the only Gaelgeoir in her gang, Ruth was the spokeswoman for her own motley crew of misfits, including Skinheads Jordan Walsh and Keelan O’Brien, fellow Goth Saoirse Karadag and Punk Robert Ovington.

Ruth wasn’t even born when her favourite bands, The Cure, Siouxie and the Banshees, and Bauhaus were peddling their own particular brands of gloom back in the early ’80s.

“I’m an opera singer myself! I tried all sorts of music, but it’s Goth that I really love! I started dressing like this when I was about 14 years’ old and it’s been a gradual development since then,” Ruth revealed.

“I stand out because of the way I look … we all do. People look at us when we’re in town, I like it. The programme was perfect for me; I loved being on it because I always try to put myself into new things.”

Though Ruth may be the only Goth in Carlow, she’s found her tribe in among her friends of Skinheads and Punks.

As for Sharon, she’s gone back to her cultural roots as a Mod, thanks to fellow brethren Martin Bradshaw, Adrian Townsend and Tony Harrison, who run a monthly club called ‘The last chance soul club’ in Scraggs Alley on Tullow Street, Carlow.

“I call it my Mod-life crisis!” laughed Sharon.

The Mo Threibh series is available on RTÉ Player with Sharon and the Mods appearing on the second programme, while Ruth is featured on the fourth.