A journey of small steps and giant leaps

COLM Bonnar’s words suggest Carlow’s recent successes have surpassed even his wildest dreams. In his first season with the county, they lost a national league Division 2A final and even though it was a wet day, they didn’t perform. Then something changed and Carlow beat Antrim by 5-23 to 4-15 in the Christy Ring Cup final in Croke Park.

“In the Christy Ring we had a couple of facile wins and we didn’t know where our potential lay. Antrim were the big guns who we couldn’t beat,” the Carlow manager recalled.

Then came the Ring Cup win.

“It showed we had big potential. After losing the league final that year, little did we think 18 months later we would be here getting ready to play the All-Ireland finalists, Galway, who are the present Leinster champions, and Kilkenny who are multiple All-Ireland winners over the last 10 years.”

Success at your own level is all very well but when you find that each win projects you onto a higher level where the demands are bigger, it tests the resolve of the players and the management team. For two years now Carlow have had to step up to the mark after each competition.

“If anything it has forced the lads to work harder and get the strength and conditioning right, get the fitness right. Without that we would be found wanting,” says Bonnar.

The 2019 NHL was the big test. Not quite with flying colours, but Carlow passed. 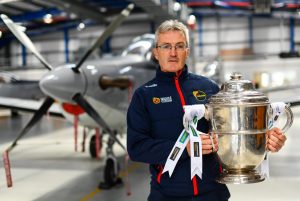 This is the platform Carlow are using now.

The Carlow manager has always targeted performances rather than silverware. He explains his reasoning.

“It is very hard if you have set your goal on winning. Sometimes you will end up disappointed and frustrated.

With this in mind Carlow have been preparing step by step for the championship.

“We are not talking about winning Leinster championships. We know we are not at that level but it is about knowing where the best teams are, trying to compete with them and seeing can we bring our game to a level which these teams have been for the last 5-6 years.

“Galway and Kilkenny are favourites. Our boys couldn’t ask for more in terms of seeing where their game is. I hope by the end of the game we are still standing, that we are still a very united bunch, that we can take the good with the bad. Before we were able to dominate a team for 15-20 minutes and take our scores. If a team like Galway dominates us for that time, they could put serious scores on the board. That is where we will have to feel can we hang in there, keep the scores down and when we get our moment of glory get a goal, keep it ticking over like we did against Galway in the league.”

Then they have to do it against Kilkenny, Dublin and Wexford. Carlow are all set and are looking forward to the Leinster senior hurling championship.