Cyclists put the pedal the metal for Mount Leinster Challenge

RECORD numbers donned their lycra and took up the Mount Leinster Challenge recently.

Around 550 participants tackled a variety of routes from Ballinkillen up to 140km in length, while more than 150 took part in the family cycle.

It was highest turnout for the event, which is now in its fifth year.

One of the organisers David Connors said: “It’s the word of mouth. A lot of people who attend are repeat visitors. They might say it to other cyclists, while others hear about it on social media … the thing with cyclists is if you feed us pretty well and nurse us around the course, we will come back!”

David added: “It’s a big challenge, especially those who do the 140km route. They have to go up Mount Leinster twice from the Bunclody and Myshall sides. You know what you have been doing after it!” 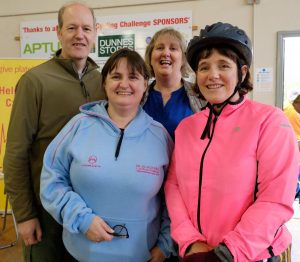 Pictured at the start of the Blackstairs Cycling Challenge in memory of Eoghan and Ruairi Chada in Ballinkillen were John McHugh, Kathleen Chada (2nd left mother of Eoghan and Ruairi), Rose Sheppard and Deirdre Tobin. Photo: michaelorourkephotography.ie

Some of the cyclists were in the saddle for up to six hours, so they enjoyed a mighty feed when they came back into Ballinkillen Centre, while refreshments were also served at the half-way point in Borris.

The event is well supported by cycling clubs in Carlow, while participants from adjoining counties and even Dublin and Cork also attend.

The cycle is dedicated to Eoghan and Ruairi Chada. Both boys attended the local school and GAA club in Ballinkillen. The event initially raised funds for these two worthy causes, but this year it also raised money for the Jack and Jill Children’s Foundation and Down Syndrome Ireland. It’s believed this year’s cycle raise around €16,000.

A total of 150 volunteers were on hand to marshal the course, help with parking and prepare food for the hungry cyclists.

“Without them, we would not be able to do it,” said David. “It all comes does to everyone doing a little bit on the day.”

About 70 marshals were stationed at junctions along the route to ensure safety for the riders, which was really appreciated by the cyclists. Despite the wet conditions, all cyclists finished safely and members of the Order of Malta were also in attendance.

The event also received fantastic support from sponsors, who were thanked along with the volunteers and all of the cyclists who took part.