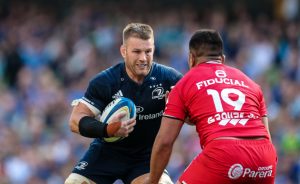 Sean O’Brien will start in the back row on Saturday

The Tullow Tank starts at number seven in a power-packed team which includes captain Johnny Sexton at outhalf and Tadhg Furlong who makes his 100th appearance in blue in the front row.

Unfortunately there is no place in the match day 23 for Carlow’s Ed or Bryan Byrne, despite both having made big contributions in Europe and in the PRO 14 this season.

Rob Kearney starts at full back with Jordan Larmour and James Lowe on the wings. Robbie Henshaw and Garry Ringrose line out in the number 12 and 13 jerseys respectively.

In the half backs Luke McGrath starts at scrumhalf with captain Johnny Sexton at ten.

In the pack Cian Healy, Seán Cronin and Furlong start with Devin Toner and James Ryan behind them in the second row.

In the back row, Australian international Scott Fardy starts at six, with O’Brien at seven and Jack Conan at number eight.

The game kicks-off at 5pm and will be live on Channel 4, BT Sports, Virgin Sports, RTÉ Radio and Newstalk.