Eoin a star of ‘today’ show

A YOUNG man from Graiguecullen Parish Childcare Centre was the star of the show when he made a recent appearance on RTÉ’s Today with Daithí and Maura.

Eoin Kennedy (5) from Crossneen and his mother Deirdre made their appearance alongside celebrity chef Rachel Allen to help promote the upcoming Down Syndrome Ireland Ice Cream Fun Day, which will raise funds for the charity. 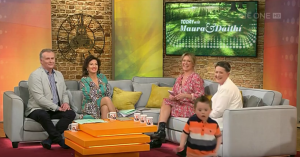 Deirdre works as inclusion coordinator at Graiguecullen Parish Childcare Centre, which prides itself on its inclusive atmosphere and they work hard to make sure everyone has a place.

“At the moment, we have five children with Down Syndrome,” says manager Diane Darcy. “Deirdre is the link coordinator and, as a parent and a professional, she is a great resource to the parents.”

This year’s Ice Cream Fun Day is focusing on raising money for See and learn packs, a learning resource of flash cards which has proven successful for Eoin and which will be rolled out to other preschools around the country.

Down Syndrome Ireland also hopes to raise funds for Parentlink, which is a support network for new parents of babies with Down Syndrome.

Eoin’s appearance on TV is not the first time he has hit the limelight.

A book called Including Me, produced by Graiguecullen Parish Childcare Centre about Eoin’s time there, picked up an Inspired Practice Award from Early Childhood Ireland at a ceremony in the Alex Hotel, Dublin recently.

“We came up with the idea from watching Eoin and how he settled in with the other children in the room,” says Diane. “We noticed he made a particular friend and we watched that develop over the year. We were just so touched with how it worked out that we decided to make that story into a book.”

A collection of photos, the book wonderfully captures how, with the help of their teachers, young people can overcome the challenges life places before them.

“Down Syndrome Ireland picked up on the book and they are delighted with it. They are using it on their website as a resource for parents to download,” says Diane.

This June, Graiguecullen Parish Childcare Centre will organise its fourth annual Ice Cream Fun Day and it is just part of the work they do to support children with additional needs.

“We have an open-door policy,” says Diane. “We are fully accessible. We have a full disability certificate from Laois Co Council. There’s no place a child can’t go in the service and we have been like that for quite a while now. No one is excluded and everyone can access the service in the same way. It’s something we work hard at and we take it very seriously.”