The Tullow Gate was officially opened by mayor of Carlow Ken Murnane, with a large crowd eager to get inside and see what was on offer. Manager Damien McConomy said it had been a busy start.

“Everyone has been fantastic; other businesses are supporting us and it’s been really nice,” he said. “It’s going so well. It’s been nice and busy, but staff have been coping really well.”

JD Wetherspoon has spent just over €3 million developing the outlet on the site of the former Traders Bar. The Tullow Gate ran a ‘soft’ opening the weekend beforehand, inviting locals, including businesses, in for some free food to give them an idea of what was on offer. 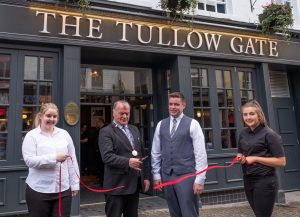 Damien said: “It’s affordable drink and food for everybody. We want people to come for a night, have a meal and enjoy themselves.”

The business prides itself on its prices, with a lunch deal of a panini/wrap, side order and mineral for under a fiver, while a pint starts at €2.95. The pub takes its name from the Tullow Gate, one of the four town gates in the old walls around Carlow that once stood near the site of the new pub.

JD Wetherspoon currently runs five pubs in the Republic of Ireland and Tullow Gate marks its first pub outside Dublin and Cork. The Tullow Gate is also decorated with photos and details of local history and characters as well as featuring work by local artists.