IT’S not the way Sean O’Brien would have liked to end his European journey with Leinster but sport can be a cruel mistress.

The Tullow Tank watched the final 18 minutes of Saturday’s Champions Cup final from the bench after emptying himself for the jersey over the course of the previous hour of play.

All that mattered was that when the final whistle blew at St James’ Park in Newcastle a few minutes before seven o’clock, Saracens had done enough to build a winning score and Leinster were going home empty-handed.

And so came to an end Sean O’Brien’s final game in Europe for Leinster before he decamps to London for a whole new chapter with the Exiles.

It only seems like yesterday that he made his Heineken Cup debut against Castres, but that was 10 years ago last December.

Still nailing down a regular starting position with the province, he didn’t play when Leinster won the Heineken Cup in 2009. But by the time Northampton were beaten in the 2011 final, O’Brien was making waves as one of the most dynamic backrows in the game. The pride on his face when he held up the Tullow jersey on the pitch after that victory said all you needed to know about what that win meant to him. He was at the very top of the club game but the ties that bound him to home were and remain strong. 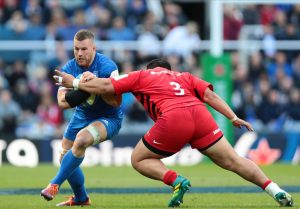 Sean O’Brien looks for a way past Titi Lamositele of Saracens during Saturday’s Heineken Cup final in Newcastle Photo: Getty

What would the Carlow people in the stadium on Saturday have given to see him pull one more medal onto his shoulders, it would have been a fitting way to close a chapter. But it was not to be.

Leinster certainly had their opportunities. When Jordan Larmour raced clear after a brilliant tackle by Luke McGrath after just 12 minutes, it seemed as if a try was on. But the composure wasn’t there. Then despite leading 10-3, Leinster couldn’t close it out to half-time and with Scott Fardy in the bin Saracens brought it back level, thanks in no small part to a poor decision from McGrath to box-kick when the clock was in the red, handing the initiative back to the opposition. They took it with both hands and Sean Maitland crossed for a try.

If Leinster had held a lead going into the second period they could have concentrated on keeping Saracens turned and forcing them to defend. As it was they stood off a little as the English team attacked relentlessly.

Then when you have a bludgeon like Billy Vunipola in your team, you can strike for the line even when a try looks unlikely.

There was disappointment for the Byrne brothers – Ed and Bryan – at not making the match day 23. In particular for Ed who had made a big contribution throughout this year’s Champions Cup campaign. But much like O’Brien in 2009, they will have to continue to work hard, bide their time and be ready to make the most of the next opportunity to impress.

As for O’Brien. His time at Leinster is coming to a close but it ain’t done yet. There is the not-insignificant matter of a PRO14 semi-final against Munster next Saturday. How he would love to get another rattle at the old enemy, and in front of the home support at the RDS.

Then, perhaps, a PRO14 final too before he finally pulls off the blue jersey for the last time.

He owns the province nothing. He has put his body on the line time and time again and it’s great that the tank can head to a new battlefield. Just as planned, London Ireland are returning to the Premiership next season. Back with the big boys. With O’Brien leading the charge, they will be stiff opposition for anyone.

One imagines Saracens haven’t seen the last of him yet.