FOLLOWING on from their success in the All-Ireland basketball play-offs hosted in Baltinglass, the Scoil Chonglais junior girls’ basketball team made their way to the National Basketball Arena, Tallaght on Tuesday 30 April to compete in the junior C All-Ireland schools finals for the first time in history.

The semi-final match was against St Louis, Carrickmacross. The first quarter was extremely close. Shauna Cahoon converted three baskets and Yvonne Sheehy Curtis added one to leave Scoil Chonglais trailing by one basket, 8-10.

The second quarter saw the Scoil Chonglais girls settle and begin to find their rhythm, with six scores coming from the brilliant Siofra Adams, leaving the Baltinglass side ahead by three points at half-time, 19-16. The third quarter continued like the other two, with both teams giving their all to secure a place in the final. There were some excellent plays from both teams.

However, Scoil Chonglais held the lead at 26 -22, with Shauna Cahoon and Siofra Adams again dominating the scoreboard.

In the final quarter, the game was level at 28 points each before the Baltinglass girls dug deep again to take the lead, with Lia Arnold adding her name to the scoresheet. The final score was 36-30 to Scoil Chonglais who progressed to the final where Sacred Heart, Clonakility awaited. 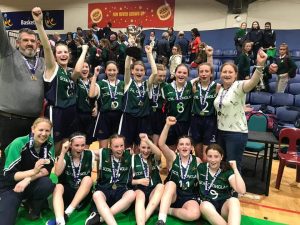 The Scoil Chonglais girls celebrate the win with their coaches

Shauna Cahoon showed her brilliance again in the first quarter scoring five baskets in a row. Then, later in the quarter, she scored three free shots with Lia Arnold O’Reilly scoring four baskets to secure an 18-4 lead. The Cork side clawed their way back in the second quarter scoring the majority of the baskets, but the Wicklow girls were not giving up yet with Siofra Adams scoring a well-worked basket towards the end of the quarter to make it 22-14 to Baltinglass.

In quarter three, Lia Arnold O’ Reilly was like lightning as she scored two baskets. SHC replied with two baskets and a free throw, but the girls were fast to react and Shauna, Siofra and Lia scored four baskets between them. The score was 38-23 at the end of the quarter.

SHC did make a comeback scoring 12 baskets, meaning the score was 38-35. Time was running out and the Baltinglass girls really needed a score if they were going to be guaranteed victory. Star player Shauna Cahoon managed to steal the ball and ran the length of the court to score the final basket and secure the win for the Scoil Chonglais girls.

As the final whistle blew, the stadium erupted after the supporters counted down the last 10 seconds of the game as loud as they could. Scoil Chonglais had become All-Ireland champions for the first time ever. Parents and supporters alike made their way onto the court to congratulate the team and coaches as they awaited the formalities until they lifted the cup. The captain Cadla Moran called her team and coaching staff up to receive their gold medals. Special thanks was expressed to the team’s coaches Miss Morrissey and assistant coaches Stephen Begley and Sheens Moran.

What an amazing end to a fantastic season.