Sister Act was the hottest ticket in town

SPONTANEOUS standing ovations, unending plaudits and a battle for tickets to rival The Hunger Games. Striking Productions’ Sister Act was the hottest ticket in town last week, living up to all the hype with its six incredible sell-out performances that left audiences begging for more.

The popular musical was the first AIMS-produced musical in Carlow in over 20 years and brought with it an incredible level of professionalism, rivalling anything on the West End.

The local theatre company pulled out all the stops to bring the joyful, uplifting and fun-filled story of Sister Act to the stage. From an on-stage live orchestra, to amazing costumes, a terrific set and astonishing performances from all the cast, Sister Act has brought theatre in Carlow to a whole new level.

Directed and produced by Robert O’Neill, the show was perfectly cast, bringing out the absolute best in all of its talented lead characters. Kayla Kehoe was simply astonishing in the lead role of Deloris Van Cartier, her comic timing, sassy one-liners and incredible singing voice endearing her to audiences. It was a role that was truly made for her.

Audrey Cooper as Mother Superior was another tour de force. From her cutting disapproval at the beginning to showing the development of Mother Superior’s softer side, Audrey played the part to perfection. 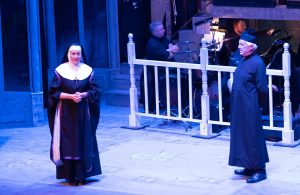 Sister Mary Roberts was played brilliantly by Siobhan Kavanagh, providing much of the uplifting joy of the show, her amazing singing voice one of its real highlights. Sister Mary Patrick was played by Cathríona Kelly, whose wonderful facial expressions and carefree innocence were terrific.

Sr Mary Theresa was played by Ursula Hayden, Sr Mary Martin played by Aoife Doyle and Sr Mary Lazurus by Mary O’Driscoll. All three were excellent, lighting up the stage every time they appeared.

Officer Eddie Souther was taken on by Barry Harmon, a wonderful interpretation of Sister Act’s genuine nice guy, who finally gets the girl.

Deloris’s back-up singers were played with real sass by Michelle McMahon and Tracy Rea, while Gary O’Keefe was a great Ernie and Paddy Behan hilarious as Mgr Paddy Behan.

But what made Sister Act even more impressive was the contribution by the cast as a whole; the continuous inter-action between all characters, whether part of the dialogue or not, was what made this show so special. Every time the nuns came on stage, you knew something exceptional would happen – they worked so incredibly well together.

From facial expressions to movement, dance routines to costumes changes, everything in Sister Act was seamless, professional and a joy to watch

Little wonder that each night of its run, a buoyant audience jumped to its feet, eager to applaud this outstanding production.