KILKENNY started the first-half playing into a strong breeze, but they were first on the scoreboard thanks to a free from Caoimhe Dowling.

Carlow’s Eleanor Treacy was proving to be tough to deal with due to her strong runs from midfield. Rachel Sawyer earned her side a free after she took on her marker and was fouled, Tracey tapped over the free. Carlow were showing signs of great defending and were always first to the second balls.

Tracey was involved once again in Carlow’s goal. Her free from the half-way line aided by the wind flew over the head of Walsh to give Brendan Phelan’s women a four-point lead. Carlow’s forwards were working well on and off the ball and Eve Sinnott scored a superb point over her shoulder as Carlow began to take control.

Kilkenny had to wait until the 29th minute to get their second score and it came from a free from Dowling. Kilkenny reduced the lead to three as Katie Nolan fired over. Carlow ended the first half scoring with a point from Quirke after she was found with a great ball from Treacy. Carlow went into half-time with a four-point advantage.

Kilkenny came rushing out of the blocks in the second half and had their first score of the half courtesy of Nolan. Nolan was at the forefront of all that Kilkenny done and her efforts were rewarded with a goal. The St Martins’ woman burst through the Carlow defence and unleashed a great shot into the back of the net. 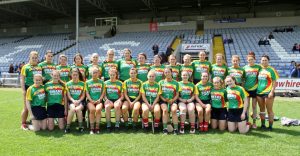 The Carlow team who lined up in the
Leinster Intermediate Camogie Final against Kilkenny at O’Moore Park, Portlaoise on Sunday
Photo: iLivephotos

Nolan gave Kilkenny a three-point lead as she pointed three frees. Nolan was at it again as she scored a marvellous point from play. Dowling and Nolan scored a further two points from play as Kilkenny took the game by the scruff of the neck and gained full control.

Eadaoin Murphy got a point of her own as Kilkenny went on a scoring blitz in the second half. Ciara Phelan from Dicksboro got her name on the scoreboard as she scored a superb score.

Doran ended her side’s scoring as she struck another 1-1. Her second goal of the game came from a great piece of build-up play by the Kilkenny forwards. Carlow’s only score of the half came from a Treacy free and it turned out to be the final score of the game.

Carlow couldn’t get any momentum going at all in the second half. All in all, Kilkenny were deserving winners with their marvellous second-half performance.