‘Dublin are a good team’ – Byrne

THERE wasn’t a lot to smile about on Sunday, but when it was put to Eddie Byrne that there might be divided loyalties in his house over the next week, the Carlow player had a good laugh about that.

He confirmed that his mother, Margaret, may be originally from Wexford, but she will definitely not be wearing purple and yellow on Saturday.

“She is well converted at this stage, especially with two lads on the team. She has had to nail her colours to the mast at this stage,” Eddie said emphatically.

There were some who felt that this was a banana skin for Dublin. Byrne wasn’t thinking like that. 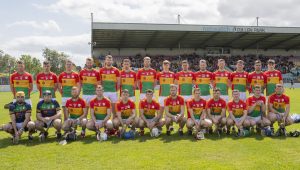 “You cannot take anything for granted at this stage of the championship. Dublin are a good team. You saw that against Kilkenny. They put it up to Kilkenny for a good spell, but just didn’t get over the line.

“We know they have quality hurlers and are well able to move the ball around.”

When the visitors had their periods of dominance, they kept the scoreboard ticking over.

“They have an impossible game to stop when it clicks. You have to take your chances and hope the backs can get a touch on the ball in one-on-ones.

“We probably didn’t help ourselves and didn’t play as well as we could. These things happen. We are still learning and they have that quality, which they showed today.”