Nothing slapdash about fantastic new version of a classic musical

ADVENTURE, intrigue, anticipation … Slapdash Theatre’s Treasure Island had it all, when they took their entirely original musical to the stage recently.

Written and directed by Carlow’s Janice de Broithe, this staged version of the Robert Louis Stevenson classic was a thrilling leap of faith, one that paid off thanks to a talented cast and an astounding score of original songs by musical director Chris O’Sullivan.

Treasure Island ran over four performances at the George Bernard Shaw Theatre featuring a cast of almost 70 of all ages.

There was so much to enjoy about this production, it’s originally in particular deserving of enormous credit.

One of the talking points was certainly the amazing set, designed and constructed by Tadhg McSweeney. The ingenuous set transformed effortlessly from a bar to a ship to an island throughout the performance, a real sight to behold as the sails were raised and its deck revealed. 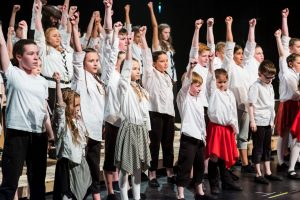 The cast of the Slapdash Theatre on stage with Treasure Island

Taking on the role of Jim Hawkins was Oisín O’Reilly, who gave a fantastic performance throughout. Long John Sliver was played with great menace by Darren Somers, with Evan McCormack assured in the role of Dr Livesey and Katie Jacques equally impressive as Israel Hands.

Tadhg Ó Griffin was one of Treasure Island’s** standout performers. So, too, was Fiona O’Reilly as Captain Smollett. Jade Ellis was Morgan, Eoin Byrne played Abrahan Gray and Adam Byrne was O’Brien.

The feisty Bob was played with great effect by Alannah Willoughby, while Seán O’Driscoll brought real humour to the role of Ben Gunn.

The chorus was spectacular throughout, with some wonderfully choreographed group routines adding atmosphere, suspense and expectation. Great credit is therefore due to choreographer and movement director Tara Landers for bringing the adventure of Treasure Island to life.

The enormous task of writing and directing an original musical was a challenge artistic director Janice de Broithe relished in. Sharp, witty and emotional, **Treasure Island** was fresh and new without straying too far from the much-loved original.

It was the music score, however, that really set Treasure Island apart. The lyrics written by Janice and the music by Chris O’Sullivan were truly spectacular and were the real highlight of a very enjoyable show.