Local volunteers head off to Uganda

A GROUP of nine people left for Uganda yesterday (Monday) as volunteers under the umbrella of the UgaIrish project, which provides humanitarian aid to the people of Baale on Lake Victoria. The group will be led by Siobhán Kinsella, founder of UgaIrish.

In 2006 on a visit to Uganda, Siobhan observed at first hand the poverty of the people who lived in the bush and determined to help them. She established the charity, naming it UgaIrish. The ten-day trip will be Siobhan’s 13th visit to the east African country. 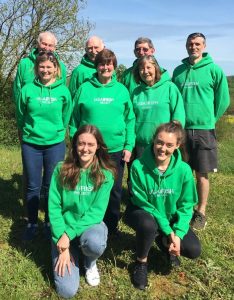 It will be a nostalgic occasion for Siobhán, as last year she was accompanied by her husband Austin, who passed away on Friday 26 October last. Austin was seriously ill when he travelled to Uganda, but insisted on making the trip so that he could complete a number of projects on behalf of UgaIrish.

This year’s UgaIrish contingent will establish that the projects initiated by Austin have been completed by the people of Baale. These works included the boring of a second well, buying a fishing boat for the local community and the purchase of a strip of land for agricultural development. They will also engage in painting the school the group has established for the villagers as well as undertaking maintenance work on the building.

For five of the nine it will be a maiden trip to Uganda. Those ‘first timers’ are Larry and Sally MacDonald, Ballinacarrig, Carlow; Fr Tom Lalor, CC, Tinryland, a friend of the Kinsella family who officiated at Austin’s funeral; Hannah Collier from Shillelagh; and Niall Kinsella, son of Siobhan and Austin. The group will be completed by Colette Byrne, Fenniscourt, Bagenalstown, a cousin of the Kinsella family, John Connolly, Gowran, Co Kilkenny and Emma Collier, twin sister of Hannah.

Colette and John have taken over the financial affairs of UgaIrish, a role that Austin Kinsella had filled up to the time of his death.

On the May Bank Holiday, UgaIrish held its annual fundraising walk along the Barrow Track from Carlow to Leighlinbridge.