SIXTY-eight tractors, four cars and several motorbikes took part in a recent tractor run that has been organised by St Mary’s Church, Baltinglass since 2014.

During that time, the event has raised thousands of euros for the Baltinglass Rectory Restoration Fund as well as the Lalor Centre, which provides services for adults with an intellectual disability.

“We are very, very happy with the way it all went,” said a delighted William Burgess, who started the charity event six years ago.

“If we had the same support every year, we would be extremely happy,” he added. 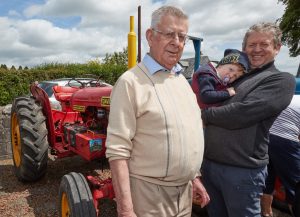 Taking in a route from Bough Hall, Rathvilly, the cavalcade made its way through the highways and byways of the local countryside before finishing up at the starting point.

While the organisers would like to thank everyone who came out and supported them on the day, they are also indebted to the local business community. This year’s event has already raised €6,500 and all of the funds will go to the Baltinglass Rectory Restoration Fund and the Lalor Centre.