Summerfest keeps it country with two nights of top acts

CARLOW was all about keepin’ it country as the country music Summerfest once again lit up the stage at Carlow Rugby Club. From line-dancers to Stetson hats and check shirts to cowboy boots, Summerfest’s fantastic atmosphere made it a bank holiday weekend to remember for the thousands who attended.

“Yes, it went really well and everyone had great fun,” enthused Michael Carbery, president of Carlow Rugby Club. The Carlow club organises the now annual Summerfest, putting in an enormous voluntary effort to ensure a well-run, enjoyable time for all.

“The line-up was very good this year and we improved and tweaked a few things from last year, so overall we’re really happy with how things went,” added Michael.

On the opening night, Carlow’s own Derek Ryan was the headline act, springing the marquee into life as the huge crowd took to the floor to dance and sing along.

Rows of Derek’s adoring fans lined the front of the stage for what was a real highlight of the weekend. 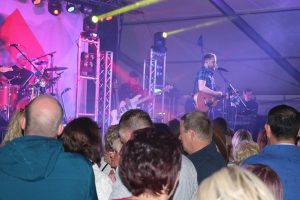 Earlier that evening, the crowd were treated to some terrific performances by Dominic Kirwan, Barry Kirwan and Dancing with the Stars favourite Cliona Hagan.

Earlier that evening, Ben Troy, Crystal Swing and Robert Mizzell performed, with Crystal Swing’s Derek raising the energy massively, with all his kicks and flicks going down a storm with the crowd.

The huge task of putting Summerfest 2019 together is an enormous credit to its hardworking 20-person committee, which includes members of Carlow Rugby Club and the festival’s music promoters Ollie and Walter Hennessy.

“We have a very strong committee,” said Michael. “Each member is called a captain and the various captains are put in charge of all the different requirements for an event like this – the food and drink vendors, operations, insurance, parking, volunteers, feeding the volunteers. We’ve been meeting every Wednesday night since last October to make sure things run really smoothly,” he added.

“Ollie and Walter organise the line-up and promotions and we flesh it out and put it all together. We did it all last year, so I suppose this year we had a really good template to work from,” explained Michael.

“We had 142 volunteers between the two nights this year. For the club itself, it’s a great boost for us. We are all involved in rugby and have a great interest in the game, but an event like this saw everyone from the club row in behind it and create great fun and great camaraderie,” he said. “It creates a great spirit in the club itself.”

Michael thanked Carlow Tourism and South East Heritage Ireland for their support as well as the various local businesses that support Summerfest.

At this stage, Summerfest 2020 look like a certainty, with Carlow well and truly securing its niche among Ireland’s many country music fans.