Over 300 people took part in the event to raise money for the Bro Leo walking track in Tullow and Epilepsy Ireland, a charity nominated by James’s parents.

“There was great weather, a great local turnout, loads of James’s friends from both St Laurence O’Toole’s and St Abban’s athletic clubs, people from his old school; there was a great crowd,” Padraig Murphy told The Nationalist. 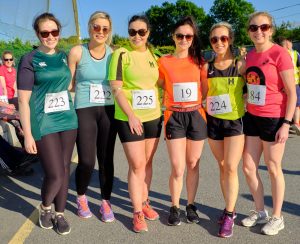 “The Griffins donated some of his trophies for the event. Teresa Griffin, his mother, presented the trophies afterwards. The main special guests were James’s parents and his sister and fiancee. It was an emotional day for the family as he just passed away a few months ago. The run will be an annual event and will become the James Griffin Memorial Run.”