Every year, NUI awards honorary degrees to a small number of individuals who have distinguished themselves in various walks of life. The senate of the university nominated Michael ‘for his exceptional contribution to Irish folklore and industrial archaeology’.

Speaking at the conferring on Tuesday 28 May, chancellor Manning said: “Michael Conry has provided for generations to come a priceless record of the way of life in rural Ireland not so long ago, but now almost completely forgotten.” 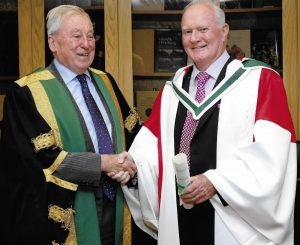 Dr Maurice Manning (left), chancellor of the National University of Ireland, presents Michael J Conry with his honorary degree in literature (DLitt) from the NUI at the universitys headquarters in Merrion Square

He added that Michael had a long and distinguished career as a scientist with An Foras Talúntais. “This sparked his interest in Ireland’s rural past and rural environment. As a result, he has published nine books on a variety of subjects.”

A native of Tulsk, Co Roscommon, Michael has lived in Carlow since 1962, so has long since become an adopted Carlovian! He received his early education in Elphin and Roscommon CBS. Michael entered UCG in 1954 and four years later graduated in agricultural science. He was employed as a research officer with An Foras Talúntais in 1959 and during his career in soil science was awarded an MSc by Ghent University, Belgium and a PhD from Trinity College Dublin.

As a result of his large volume of publications and standing as a soil scientist, Michael was elected a fellow of the Institute of Soil Scientists (UK) in 1990.