BALLON emerged victorious by the narrowest of margins over Clonmore in a highly entertaining division 5 final at Brother Leo Park, Tullow on Sunday evening. Clonmore started strongly against the breeze with scores from Eoin Colman and Wesley Tallon in the first and third minutes.

Conor Lewis registered Ballon’s first point in the sixth minute. Frank Fanning levelled and when John Murphy edged them in front in the twelfth minute they controlled the game from this stage. Master of ceremonies at centre forward was Frank Fanning who raced through to crash home their first goal as they led by 1-4 to 0-2 at the end of the first quarter.

A brace of points from Owen Colman narrowed the gap to a goal but Alan Kelly and Frank Fleming scores made a four point margin at the break, Ballon 1-7 Clonmore 0-6.

On the restart, Ballon pointed straight away, and then the game came to life as Alan Humphries who had come on at the break laid on a perfect pass for Eoin Colman to shoot low and hard for Clonmore’s goal.

The tempo and adrenalin was now flowing freely as each side dearly wanted victory. Mighty deeds were performed although not fully executed. Clonmore trailed by a point for long periods of the half.

Entering the last quarter corner forward Conor Lewis gave Ballon a tonic with a well taken goal. Clonmore didn’t go away as they mounted big pressure on the Ballon goal. Points from Colman and fullback Willie Rooney cut the deficit to a single point.

Ballon breathe sighs of relief as twice they saw the football go all across the goalmouth but not hit the net. 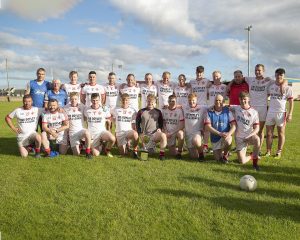 The Ballon GFC side who claimed the Junior Division 5 title after their win over Clonmore at Brother Leo Park Tullow
Photos: Thomas Nolan Photography.

Clonmore were also unlucky to see their last effort go wide. It was great to see a sprinkling of golden oldies on each side performing with gusto.

For the winners James Carroll at full back had great duels with Eoin Colman. Adrian Barry, Tom Murphy and Glen Pullen were solid in defence. John Murphy and Conor Kearney worked hard at midfield and Frank Fanning led the forwards. He had able dealers in the shape of Alan Kelly, Michael O’Leary and Conor Lewis, Andrew Farrell did well when introduced.

Clonmore will be disappointed as they will see this game as the one that got away. However, the efforts of Willie Rooney, Josh Bowes, Jake Hickey, and Cormac Connolly in defence along with John McGrath and Luke Connolly at midfield, Collie McGrath, Wesley Tallon and top scorer Eoin Colman tried all they knew turn the tide. Assistant secretary John McDonald presented the cup to Ballon captain Frank Fanning.