LOUTH are the Leinster Junior Football champions once more. A lightning start in each half, on Sunday in Netwatch Cullen Park, gave the challengers a mountain to climb as the Wee County retained the title they won last year at the same venue against the same opposition.

The reigning champions got off to a great start when they registered three points in the opening two minutes with Lauren Boyle accounting for all her side’s scores.

In fact, she could well have scored a goal too but with only the goalkeeper to beat she settled for a point. Confidence oozed through the Louth side when Kate Flood added another point and it helped them to prepare for the expected Carlow revival.

Before that arrived Louth missed a succession of goal chances which could have killed the game almost before it had started.

Eventually, the challengers settled. Much of what Carlow did well came through Edel Hayden, Kerrel Clarke, Anne Roche and Roisin Byrne with Rachel Sawyer proving to be a handful for the Louth defence. 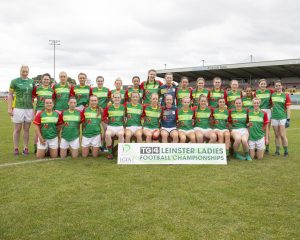 Sawyer opened Carlow’s account with a seventh minute point and Cliodhna Ní Shé followed up with a point from play.

Louth were always dangerous. While their full-forward, Kate Flood, is on her way to Australia to play football down under with Freemantle in Perth it was Boyle who seemed to have the ability to stretch Carlow at will.

The home side persisted and were rewarded with a point a piece from Roisin Byrne and Ní Shé.

Against the wind which blew from the scoreboard end of the ground the Barrowsiders would have been happy to go in only trailing by five or six points but disaster struck five minutes before the break when a through ball was latched onto by Boyle. Showing a clean pair of heels to the home defence she ran forward to blast the ball past the helpless Nicole Hanley.

A difficult situation had got worse for Carlow and there was no let-up as Boyle and Rebecca Carr tacked on further points to leave the Wee County go in leading 1-11 to 0-4 at the interval.

Carlow opened the second half scoring with a free from Ní Shé but a Louth penalty netted by Flood suggested Carlow’s initial efforts to close the gap were going to be nipped at the bud.

Despite this, Carlow raised their game limiting their opponents to a meagre two points for the rest of the encounter. If they were to make it pay Carlow had to score heavily at the other end. It didn’t happen for them and it is surely here where they will look to improve when the All-Ireland series begins.

Ní Shé scored five second half frees. Byrne and Amy Dooley also pointed from play. It won’t be of much consolation to the losing side they outscored their opponents by 0-7 to 1-2 in the second half but it was something to take out of the game.