IN sport you don’t always get what you think you deserve. After losing at home to an unfancied Westmeath side in the Leinster minor hurling championship it looked as if over six months of hard work and dedication from the players and their management team had come to nothing.

It was a hard one to take. They could have called it a day but instead they regrouped and targeted winning the lesser shield competition. Fortune favoured the brave and on Saturday in Navan they achieved their goal by overcoming the home side with an excellent display. They were far from perfect but they showed great character to bounce back after conceding an early soft goal when a speculative effort from Luke Horan wasn’t held by Jake Somers. The Carlow keeper put that behind him and was steady after that.

Scott Treacy and Conor Kehoe hit back with a point each but two points from Conor McGovern helped Meath into a 1-4 to 0-2 on 11 minutes.

Carlow enjoyed a purple patch and Jake Doyle scored 1-1 in quick succession. Building on this the eventual winners enjoyed a 1-9 to 1-6 lead three minutes before the break but instead of driving on they allowed Meath in for three points in a row to level the game.

Kehoe nudged Carlow back in front with a free immediately after the interval. For the Royals, James Murray was on target with a sideline cut and for the next 15 minutes or so the game ebbed and flowed. Murray did well to register another point from a sideline cut.

A goal was always going to be important and at the start of the last quarter an incisive Carlow move saw Fiach O’Toole off-load to Kehoe who in turn found Jake Doyle in space. The full-forward had to have been full of confidence after his 1-1 in the opening half. He made no mistake from close range. Carlow had a hand on the cup. 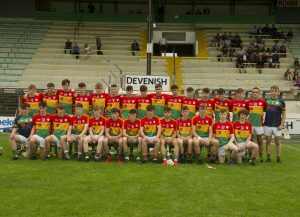 There was an element of luck to their third goal which clinched the game. After Tadgh Doran legitimately shouldered an opponent off the ball Carlow transferred play down the field. When they forced a sideline cut Jack McCullagh’s stroke flew towards the Meath posts at speed. When a forward and a back came across to gather possession neither of them made contact. Instead an unsighted keeper had no hope as the ball beat him for the third Carlow goal.

While James Murray found the net from a 20m free with seven minutes to go there was no chance of them ever catching a resurgent Carlow outfit.

Spare a thought for the Royals though. In the first round Carlow hammered them 3-17 to 1-3. On Saturday, a break here or there could have seen them lift the Peadar Ó Liatháin Cup. On the day though the better side won.