Principal Deirdre Nolan led the tributes to her at a special Mass, while other staff members and students past and present said prayers, poems and accolades. The ceremony was beautifully accompanied by Maria McGuire on vocals, Fidelma Morris on piano and Yvonne Bolton on violin.

Hailing originally from Ballybrit, her three sisters travelled over from Galway to be with Sr Anne Marie on her special day. 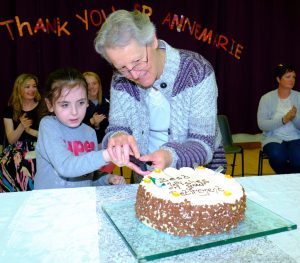 A Presentation Convent sister, she was a real educator, teaching the whole gamut of students, from the little ones right up to the school leavers. Not only that, she ran the after-school and youth clubs, organised sporting events and soccer fixtures with schools in surrounding counties and even coached the girls’ soccer team. Whenever she could, she also raised funds, not only for the school but for impoverished children and adults throughout the world.

“Sr Anne Marie is always busy! The school is her entire life and she had a huge influence here,” Fiona Burgess from St Laserian’s told The Nationalist. “She was absolutely and completely dedicated to the school.”

She joined the school 39 years ago, a year after it opened and has been a lynchpin in the establishment ever since. At her retirement party, the generations of children and young people that she helped to teach and mentor were remembered.

“Sr Anne Marie was always here, working. She was always raising money for people who needed it, too. She is such a giving person. She’s actually irreplaceable,” Fiona concluded.