Former Läpple staff meet up for a trip down memory lane

OLD memories were fondly recalled and some new ones made as former staff of Läpple Carlow held a reunion recently. Over 60 former staff gathered in Ewing’s, Haymarket on Friday 28 June for a night of fun and reminiscences.

The main organiser of the event was Pat Timmons from Graiguecullen, who was a forklift driver and is remembered fondly as one of the biggest messers in the factory.

There were many familiar faces, with the likes Jim Carthy, Kathleen Magee and John Prendergast, who are all in their 80s.

Some of those who turned out had been employed since the company’s opening in 1974. 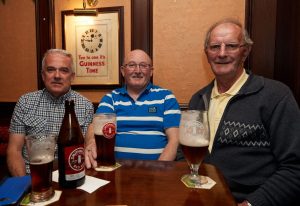 Liam Dillon, Tom Murphy and Jim Carthy were at the Lapple Reunion in Ewing’s Bar and Lounge, Carlow
Photos: michaelorourkephotography.ie

The reunion follows the ten-year anniversary of Läpple’s closing in 2017.

“It was great to catch up,” said another former Läpple worker Terry Dillon. “Some people had not seen each other in a good few years.”

There was always a great camaraderie in the manufacturing plant, while the factory’s successful football team also strengthened friendships. While former workers share a common bond, their paths have taken them to different places.

Such was the success of the night that it is hoped to run a similar reunion in the future.