ANOTHER 50 this season for Zeeshan Mumtaz, combined with three wickets and a 36 from Yasar Shah, was not enough for Bagenalstown’s first team to overcome Greystones in the Middle 2 Cup final on Sunday evening.

Batting first, Bagenalstown made 167 and were four down in no time. The opening partnership of Shozab Ali Taj (7) and Nadun Jasinghe (1) was broken early as they struggled, not for the first time this season.

Marcel Bruns (9) and Sunny Charles (0) fell early too leaving the Baggies 22-4 and in trouble. The skipper, Mumtaz, and Shah put on a partnership of 82 to steady the ship. When Shah fell, it needed somebody to bat through and keep things ticking over with 13 overs left to bat. However, the wickets kept on tumbling. Abdul Sattar (4) and Robbie O’Neill (9) fell early with the captain falling shortly after.

Khurram Mumtaz did well lower down, making 27 at number 9 but a lack of support saw him fall as Rana Riaz made 5 with Azaz Ahmad 1 not out at number 11. Whilst it was something to defend, they were short of runs and would have needed at least another 30-40 to be competitive. With the ball, they needed to strike early. They did just that as Jasinghe (1-26) picked up an early wicket.

However, Greystones rebuilt and a second wicket partnership of 73 saw them jump into a commanding position. Shah took three wickets in the middle but it was too little, too late and with nine overs to go, Greystones won. 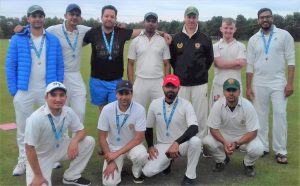 Bagenalstown 3 lost by 81 runs to Greystones 3 on Sunday. Bowling first, they conceded 201 from their 40 overs, picking up just five wickets in the process. Wickets went to Dom Byrne, Shoaib Khan, Jack Bennett, Sajjad Malik and Huzaifah Butt. With the bat, they couldn’t put partnerships together to chase what was already a tough task.

Shoaib Khan (21) and Bennett (16) made a good start but after that, there was not much to come. Ashan Wijesinghe made 9 and Sean Farrell 1.

With the Baggies four down, they were struggling. There was a little bit of resistance from Malik (6) and Byrne (10) but then they fell.

Rob Casey fell for 1 whilst Muhammed Hadeeq fell for 2. Butt offered some resistance from number nine, making 28 not out, looking impressive. However, he ran out of partners with Mat Baker falling for a duck and Colin Smith for 7.

They lost four quick wickets and looked in trouble. Saquib Nagra (57) and Qasim (22) steadied the ship and drove them over the 200 mark. Sairam Mangisetty came in at 9 and made 20 to push them up to a very defendable total. With the ball, there was joy for Asif Butt (3-34) and Nagra who was the MVP, picking up 3-35. Rocky also picked up 2-44 as they bowled them out for 164.

Carlow 2 beat Pembroke 6 by 8 wickets to qualify for the Minor 2 Cup final. Batting first, Pembroke made just 74. Mohmmed Younus was the pick of the bowlers, picking up 5-15. Mohammed Ismail 2 picked up 2 wickets with Mohammed Zamal, Solim Mohammed and Inzamam Haq all picking up one each. With the bat, there was an early casualty as Solim fell for just 6. Sofiat Alam (27no) and Inzamam Haq (29) rebuilt, putting on 60 for the second wicket partnership. Gulzur Hafeez came in at 4 and made 1 to push them across the line. They play the final on the 18th of this month.