Bagenalstown fun day enjoyed by one and all

LOCALS and visitors alike were entertained at a family fun day in Bagenalstown recently.

Organised by the Bagenalstown Festival Committee, the free day at the town park on 29 July was filled with bouncing castles including a giant darts board and stalls, while Carlow Sports Partnership held traditional field games including a sack race and obstacle course. Minnie and Mickey Mouse also put in an appearance.

“It was a great atmosphere, nothing but good reports, and everyone enjoyed the day. There was a real light-hearted, friendly community atmosphere at it,” said one of the event’s organisers, James Lakes. 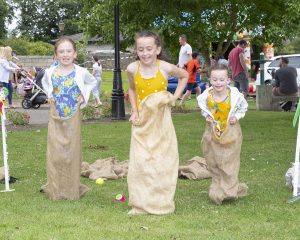 The Barry sisters, Aveline, Renee and Faye, compete against each other in the sack race at the recent family fun day in Bagenalstown
Photos: Thomas Nolan Photography

People from outside Bagenalstown out for a Sunday drive were also attracted to the festival.

The festival committee also held two traditional music nights in Doyle’s bar and Jimmy Dee’s bar on Friday and Saturday, building on the success of last year’s Leinster fleadh in the town. In previous years, a fully-fledged festival has been held in Bagenalstown with performances by the likes of Derek Ryan and Bagatelle, but it was not possible to do so this year.

Mr Lakes said the aim for next year was to return to a festival as was the tradition in the past.