THE International Youth Nations Cup took place on Saturday in Morton Stadium, Santry and it was the last track and field youth competition of the season which brought England and Ireland togather for the inaugural running of the Youth Nations Cup for U18 athletes.

St Laurence O’Toole AC was well represented on the Irish team with Luke Rice competing in the pole vault, Aaron Shorten in the the 800m and Alan Miley in the 400m hurdles and 4x400m relay.

England sent over a very strong squad and Irish wins were very hard to come by on the day. However, Alan Miley, who has had a very disjointed season so far with a few injuries to deal with, really stepped up on Saturday and was the Irish star of the day. 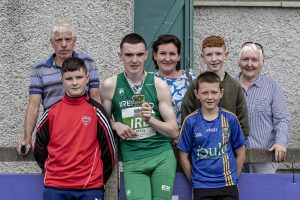 Running a very well-timed 400m hurdles, he clawed back two English athletes in the home straight, winning in a new personal best of 54.18 seconds.

Some hours later he ran the third leg of the 4x400m relay, starting about five metres behind the English athlete and he again timed his run to perfection, sprinting past the English boy in the home straight where he passed the baton over to Robert McDonnell from Galway who held on to give the Irish boys a resounding victory in the last event of the day.

Alan was jubilant after his medal wins and was very thankful to his coach Billy Delaney for putting him through the hard training sessions to get to international level, Alan said you need hard work and guidance to get to this level and was grateful to his family for their support and especially his mother, Ann, for driving him to competitions and training.

Aaron Shorten, who got his first taste of international competition in Wales about a month ago at the SIABS, really showed he had learned from the experience and ran a much smarter race on Saturday in the 800m hanging on very gamely to two very good English boys to finish a very creditable third in a time of 1:56.34.

Aaron is coached by his dad Ken and the combination this year has seen Aaron take three nationals titles at 800m and 10 nationals since he started at U14.

Luke Rice, coached by his uncles Mick and Donncha, has been raising the bar in the pole vault all season and finished off with a very nice 3.35m clearance on Saturday, taking third place.

Luke said after the competition that he is going to redouble his efforts for the 2020 season.