A LEADING Carlow businessman has said his family felt they either had to leave the town or sue the gardaí after his son was pepper-sprayed and arrested in connection with a vicious attack on his fiancée. “We were either leaving and getting out of Carlow or we were taking on the gardaí,” well-known optician Bernard Jennings told The Nationalist.

Gerald Jennings (34), a property manager, was awarded a staggering €1.1 million last week in the High Court after a jury unanimously found that the gardaí had mistreated him when they wrongfully arrested him on 2 December 2012. Gerald’s fiancée Marta Kowalczyk was brutally attacked by a complete stranger just outside her apartment while Gerald was asleep inside. In the court case against the local gardaí, the jury was told that the gardaí wrongfully suspected him of the attack and that a man unknown to Marta, Colvin Keogh from The Paddocks, Carlow, was the hooded attacker. 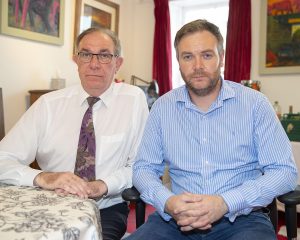 Bernard Jennings and his son Gerald: ‘Weve all been damaged by this, all of us’
Photo: Thomas Nolan Photography

Gerald’s father Bernard told The Nationalist that the mistreatment of Gerald and the gardaí’s subsequent refusal to apologise to him impelled the family to sue the force. He also revealed the huge impact the events of that night have had on his entire family.

“It makes you think about the place that you live in. We’ve all been damaged by this, all of us. The needlessness of it all. If the gardaí had apologised, we would have moved on. They’ve never apologised; it would make such a difference,” an emotional Bernard said.

He also revealed that he watched disturbing footage that showed Gerald being pepper-sprayed at least twice by the gardaí and how they hosed down his face in sub-zero temperatures in the backyard of Carlow Garda Station.

Bernard also said that it was “heartbreaking” to see how hurt Gerald and Marta were by the gardaí’s actions and revealed how he “bawled his eyes out” when he realised that his son suffers from post-traumatic stress disorder.

“He was diagnosed with PTSD and, when I heard that, I bawled my eyes out. He’s my son. He’s afraid to go out for a drink in case he meets one of the gardaí. He’s very, very careful about everything he does. It’s out of fear. He’s lived like a hermit these last six-and-a-half years,” Bernard said.