Róisín from Carlow is now Mary of Dungloe

A 27-YEAR-old construction worker from Carlow town has just been crowned queen of this year’s Mary of Dungloe competition.

Róisín Maher wowed the judges at the competition in Donegal at the weekend and won the coveted title that saw 13 other hopefuls vying for it. Róisín was representing New York, to where she moved four years ago. Although she has a degree in event management from DIT in Dublin, her move state-side saw a complete change in her career as she’s now a graduate in construction management and works as a project manager for a construction company. 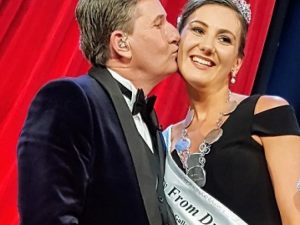 She’s also a keen fundraiser and has twice run the New York marathon for charity. Róisín, who has six siblings, immersed herself in the Irish community in the ‘Big Apple,’ so in 2017 she was awarded the Irish Echo Community Champions Award.

The Mary of Dungloe competition was screened on TG4 on Sunday night with Daniel O’Donnell as host. He was delighted with Róisín’s party piece on stage, which was a demonstration of brick-laying.

A large contingent of supporters from Carlow, including her parents and several of her siblings, were in the audience.

Róisín was over the moon when she heard her name being called out as winner of this year’s title.