THERE was a busy day’s activity for the recent annual skittles tournament at St Fiacc’s House, with teams representing residents, day care and drop-in service users taking part in what was a hugely enjoyable occasion. 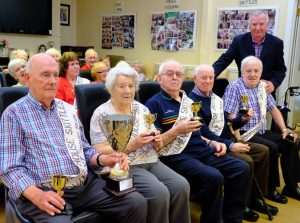 Mass was celebrated by Fr John Dunphy, with hymns sung by Jessica and Jade Nolan. This was followed by lunch and the presentation of prizes.

The perpetual cup, which was presented to ‘The House’ team, was sponsored by Bramley Jewellers, Carlow.

“We were delighted that Pat Bramley joined us once again for the day and presented the cup and trophies to the winning team,” said Joan Doogue from St Fiacc’s House. “The prizes were presented by chairperson and director Fr John Dunphy and directors Sean Harte, Margo Byrne and Breda Whitney.

“The day was a great success, thanks to supervisor Sadie Burke who organised the games, and chef Ann Flynn and her staff, who served up a beautiful meal.”

The tournament was followed by an afternoon of music by Frankie Horahan.

Residents’ representative Gaby Grant thanked everyone for attending and for making the day so enjoyable.

Theft from site in Borris