Martina retires from Garda after 37 years on the force

AFTER 37 years, Garda Martina Kennedy has decided to retire from the force and her colleagues from Baltinglass Garda Station and former colleagues from Pearse Street, Dublin, turned out *en masse to help her celebrate at her retirement party.

Up to 200 people turned up in Horan’s of Baltinglass to bid adieu to their favourite girl-in-blue, including Supt Martin Creighton, Insp Seamus Rothwell and assorted sergeants, gardaí and other good friends. Martina was joined by her husband Richard and children Shane, Craig, Jake, Adam and Molly, while her mother Peggy made it down from Cork Street, Dublin especially for the occasion. 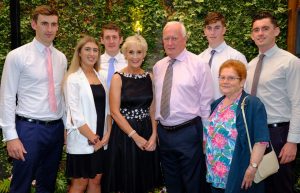 Garda Martina Kennedy from the Baltinglass Garda Station with her husband Richard, sons Shane, Craig, Jake and Adam, her daughter Molly and her mother Peggy during her retirement party in Horans of Baltinglass
Photos: michaelorourkephotography.ie

“Martina is a genuine lady who always kept her cool, even in difficult circumstances. She’s a lovely person,” Sgt Aidan McDermott told The Nationalist.

Martina was born and bred in Dublin, where her father Brendan Lynch served as lord mayor as a Labour Party member. However, although she was perfectly happy to be stationed at Pearse Street Garda Station after graduating from training college, she was attracted to making the move down the country as her family grew. She and Richard and some of the older kids, therefore, landed in Baltinglass in the early 2000s as she followed in her father Tom Scott’s footsteps. He’d served at the same station in the 1940s, where a photo of him still hangs on the wall.

At her retirement party, Sgt McDermott acted as MC, while several people, including her son Shane, said a few words in tribute to her. Supt Creighton spoke, as did her desk partner Garda Kevin Fahy. Garda Damien Prendergast spoke on behalf of the gardaí, while Garda Lisa Shelley presented Martina with a beautiful bouquet of flowers, with Insp Rothwell presenting the same to her mother Peggy.

While there’s no doubt that she’ll enjoy her retirement, Martina will be kept busy with a new addition to her family – a boisterous black puppy that goes by the name of Ollie, which was a gift from Richard and the children.