IT has been a week to remember for Old Leighlin basketball player Amy Dooley and her Ireland U20 team-mates who clinched bronze medals at the FIBA U20 Women’s European Championship (Division B) which took place in Kosovo.

The win means Ireland will now move up to the top-ranked A division for this age group in 2020, a fantastic achievement after a high-octane week of action.

Ireland sealed a 60-57 win over Great Britain in Sunday’s bronze medal play-off with Amy getting time on the court, as she did throughout the week. The win comes two years after the same group won historic silver medals at the European U18 championships which took place in Dublin in 2017. 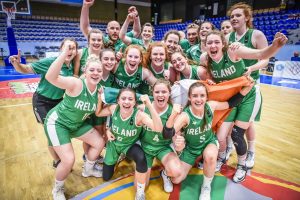 After the game head coach Martin Conroy, who is also head coach at IT Carlow, was delighted with the win.

“That was just amazing. I spoke beforehand about those 12 women and what they’re capable of and how good they are together. The first quarter today was just immense, the defence we played holding Great Britain to just seven points and putting 22 up at the other end was just phenomenal. GB are such a good team, they were always going to run at us, and they came right back at us and got it back to one point at one stage, we did the right things though.”

It was the second time Ireland had beaten GB in the tournament, having also beaten them in the group stages earlier in the week.