Tinahely Show attracts a record numbers of entries and visitors

THE 84th Tinahely Agricultural Show was a great success this year, attracting record numbers of attendees and entries to the crafts and livestock sections.

The wide range of entertainment available meant that there was something for everyone in the family to enjoy. Thousands took to the giant dance floor, where there was barely space to move for more than five hours as people danced to country music legends Derek Ryan and his band, Olivia Douglas, Stuart Moyles, Theresa and the Stars and Dancing with Declan.

Another highlight was the crowning of the 2019 Tinahely Show Queen. This year, the winner was Sarah Mary Kealy, representing O’Keeffe’s pub in Knockananna. She wowed the judges with her love of farming and sociable personality to take home the much-coveted crown. 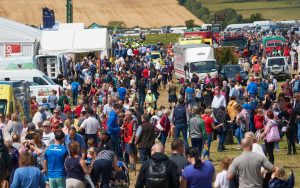 Part of the large crowds that attended the recent Tinahely Show
Photos: michaelorourkephotography.ie

The new attraction, Everyday wellness, was well received, with great attendances at each of the talks and demonstrations throughout the day, including sound bath, homeopathy and hypno-birthing.

There was a huge entry for the livestock section. The FBD all-Ireland champion Belgian Blue (female) was won by Tim and Denise O’Donovan from Dunmanway, Co Cork and the male champion was won by David Pearson, Clogh, Co Laois. The Zurich Insurance commercial championship beef bullock was won by Fiona McCabe, Roscrea, Co Tipperary, while the Derek Rothwell Memorial Stockperson of the Year championship was won by Aoibhean Hayden, Camolin, Co Wexford.

Judges were impressed by the standard of entries in the home industries section, showing the depth and breadth of talent in rural Ireland across all areas, including crafts, baking, art, farming, gardening and photography. The quilt and junior crafts section was equally impressive, providing a wonderful display of unusual crafts for visitors to admire.

With over 200 trade stands, more than 40 craft exhibitors and the wool corner, there was plenty for all the family to explore. There was lots of fun for children and teenagers alike, with a fun fair, bouncy castles, pets’ corner, talent competitions, Punch and Judy and much more.

Tinahely Agricultural Show Committee would like to thank visitors who travelled from all over Ireland to attend the show in such great numbers, along with the exhibitors, competitors, sponsors and more than 300 volunteers, who give of their time so willingly to make this great annual event happen.