Three arrested and €300,000 recovered as part of ATM robbery probe 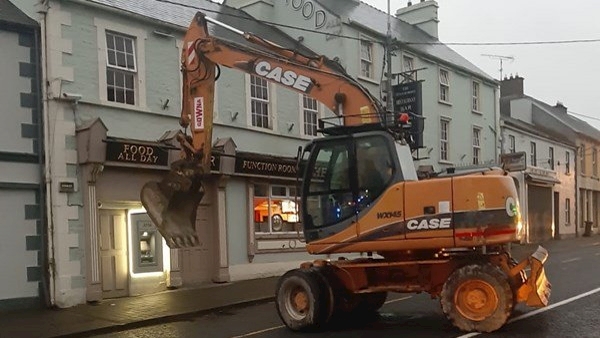 Latest: Gardaí believe there could be a link between a foiled ATM robbery in Co Cavan overnight and several similar ATM thefts in the North East in recent months.

Two men were arrested when officers intervened as a digger was being used to remove a bank machine from a wall in Virginia at 2.30am this morning.

One man, 28, was arrested at the scene and is currently detained at Carrickmacross Garda Station.

A second 25-year-old man was arrested in Virginia this afternoon and is currently detained at Bailieborough Garda Station. Gardaí are continuing to conduct enquiries to locate a third suspect.

A follow-up operation saw a third man arrested and over €300,000 in cash recovered in Moynalty, Co Meath. The 61-year-old is currently detained at Kells Garda Station.

Several vehicles have also been removed for further examination.

Gardaí say that this remains a live investigation and they envisage that further searches will be carried out soon.

An incident room has been established at Bailieborough Garda Station.

Gardaí are appealing for anyone who travelled the Virginia/Bailieborough Road and/or were in Virginia town between 1ma and 3am this morning, particularly any driver with a vehicle with dashcam footage, to contact the incident room at Bailieborough Garda Station (042) 9694570, the Garda Confidential Line 1800 666 111 or any Garda Station.

A third man has been arrested in connection with an attempted ATM robbery in Virginia Co Cavan early this morning.

Gardaí and plainclothes detectives stopped the robbery as a digger was being used to remove the bank machine from the wall on the Main Street in the town.

Two men were arrested in connection with the investigation.

In a follow-up operation, a third man was arrested and what gardaí described as a “substantial amount of cash” was recovered in Co Meath.

The suspects are being questioned at garda stations in Kells, Co Meath, Carrickmacross, Co Monaghan and Bailieboro Co Cavan.

Gardaí say that further searches are continuing this afternoon.

Gardaí have foiled an attempt to steal a cash machine in Co Cavan.

Officers in uniform and plain clothes attached to Cavan and Monaghan garda divisions, supported by garda national units, intervened in the attempted ATM raid in Virginia in the early hours of Wednesday.

Two men have been arrested and are detained at a garda station, and investigations are ongoing. A mechanical digger used in the raid remained at the scene.

The N3 was closed between Main Street and Lisgrey following the incident, and diversions were put in place

The incident comes after a number of ATMs were targeted on both sides of the border earlier this year.

Two teens arrested in connection with burglary at Limerick house

Someone in Dublin is €1m richer after last night’s Lotto