IT took her a gruelling six hours, but Elaine Jones cycled over 75 kilometres in a sponsored fundraising event on Sunday so that young people in India can go to college.

The Rathvilly native only started training for the East Meath Cycle three weeks ago, but had to face some steep hills around the beautiful countryside in Stramullen, Slane and Dramore.

Elaine, who’s new to the bike, had harboured ambitions of completing 100km in the event, but was advised that the final 30km would be too difficult for a novice cyclist. She and her co-cyclist Bernie D’Arcy, also from Rathvilly, managed to complete 75.1 kilometres in the end.

“It was really tough because it’s a hilly area. We were told that the last 30km would be too difficult for us, because some of the hills were vertical. I’m proud that I did it!” an exhausted but delighted Elaine told The Nationalist. 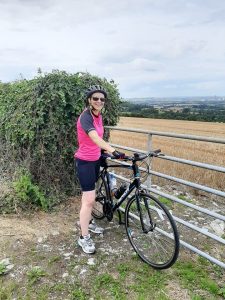 Elaine taking a breather in the beautiful Meath countryside

Elaine decided to take up the challenge to raise funds for five students who attend a school that she set up in Purkait Gheri, West Bengal. She established the Celtic Cross Free Primary School in April 2008 after a trip to India inspired her to help educate young children there. Now, the first raft of students is college-aged and five of them are going onto third level. Despite growing up in poverty, the education they received in the Celtic Cross Free Primary School has given them the confidence to continue to university.

“I thought that if they can get that far while living in mud huts, I could at least raise some funds for them!” said Elaine.

The students are eligible for government grants and they also get financial support from their own communities, but they still need about €1,000 each to get them through the academic year in the city of Kolcata, formerly Calcutta.

“Up to this point we’ve been able to cover their expenses, but now that they’re going on to third level, they need extra help. One of them is in third year at college and wants to do a masters. To think that his father lives in a run-down shack! I’m so delighted for them!” said Elaine.

Elaine’s friend Karen Kelly from Carlow is also rowing in behind the project to raise funds for the students. She’s decided to do a sponsored skydive in September and wants to raise €1,000 for the cause.