“I WAS in shock … there may have even been a few tears down my face,” smiled a jubilant Margaret Byrne, who was thrilled to be crowned the 2019 International Miss Macra.

Margaret’s proud parents Hugh and Marie were in Thurles to be part of the memorable moment and over the weekend Margaret was supported by her older brother Patrick (23), boyfriend Barry Murphy and members of Tullow Macra na Feirme.

A member of Tullow Macra, Margaret represented Carlow at the festival and was one of 22 contestants from across Ireland and abroad competing for the famous Miss Macra tiara and trophy.

“The whole weekend was a brilliant experience. To be honest, winning hasn’t really sunk in yet,” Margaret told The Nationalist. 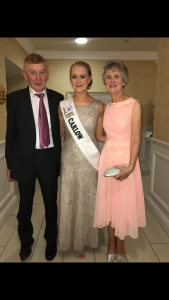 “I’m back at work now, so it’s back to reality and lots of planning for the year ahead,” she adds.

A final year student at St Patrick’s College, Drumcondra, Margaret is currently working in Kerry Foods for the summer months and is a past pupil of Ballyconnell NS and Tullow Community School.

“I joined Tullow Macra in March 2018 and when I joined, I was the youngest member in the club and my brother was the second youngest, so I didn’t know if it was for me. But then I dragged the girls along and that was it,” she says.

In the months that followed, Margaret embraced the many activities of the Tullow club, in fact, she’s become such an integral part of the club that she was recently elected its secretary.

Margaret enjoyed an action-packed weekend at the International Miss Macra Festival, which is hosted by Tipperary Macra na Feirme club Clonoulty/Rossmore over the Friday, Saturday and Sunday nights of the August bank holiday weekend.

From a tour of world-famous Coolmore Stud, to a gala banquet, on-stage interviews and even a fun sports day, where she had to tackle everything from stacking bales to peeling spuds, Margaret took it all in her stride and had an absolute ball.

“The 22 of us all got on so well. We were all paired up and I was paired up with last year’s winner Josephine O’Neill from Kilkenny, so that was a great help” explained Margaret.

As part of her duties as the 2019 International Miss Macra, Margaret attended Tullamore Show last weekend, while closer to home, she’s off to Tullow Show this Sunday and is also looking forward to the national ploughing championships in Fenagh next month.

“I was due to be in the Macra tent at Tullow Show anyway, but now I’ll be sitting in the tent with the sash on,” she laughs.

There’s also a charitable side to Margaret’s reign as Miss Macra and she has selected Down Syndrome Ireland as her chosen charity for the year.

“It is a charity that’s close to my heart because my cousin Peter has Down Syndrome. We did the ‘purple run’ and the mini-marathon for Down Syndrome Ireland before, so I hoping to do those again,” she added.