THERE was a ‘super split’ of a fundraiser for two great causes in Ballinabranna recently. Olivia Flanagan organised an ice-cream fundraiser in aid of Down Syndrome Ireland in the GAA clubhouse. Down Syndrome Carlow was also the beneficiary of a raffle, where tea, coffee and cakes were served.

The proceeds were split between the two organisations, with close to €1,000 to being raised. 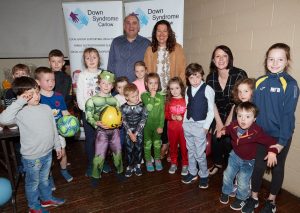 Children from the Safe Hands Montessori and creche were at the ice-cream fundraiser in the Ballinabranna clubhouse. Also pictured are proprietors Ronan Jackman and Veronica Byrne and childcare teacher Aoife Dunne

“We had a great turnout, especially from Safe Hands crèche,” said Olivia. “We had a bigger turnout than I expected, with great support from Down Syndrome Carlow.”

Veronica Byrne and Aoife Dunne from Safe Hands were also kept busy on face painting duty that saw a steady stream of children.

The causes are close to Olivia’s heart, as her son Josh is three-and-a-half and has Down Syndrome. The Carlow branch provides information and support to families. The branch also organises respite and group weekends, while there is an annual Christmas party in the Woodford Dolmen Hotel.

Down Syndrome Carlow will hold a bag pack in local supermarkets in September, with details to be published soon.