Three students earned 625 points at the secondary school, including Ciara Carroll from Clonegal and Kate Kirwan from Kildavin, along with Niamh O’Dowd from Camolin, Co Wexford.

Kate spoke of her delight at receiving the fantastic news. “I was just hoping for high enough points but never that,” she said. “I was totally surprised but delighted.” 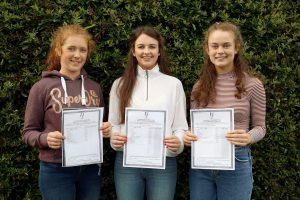 She explained that getting the study balance was all important. “I went steady at it, didn’t kill myself working. I think sport was a big thing and getting that balance for me as well.”

Kate will study engineering at UCD, while Ciara is embarking on an agricultural science course, also at UCD.

Kate is daughter of Ann and Pat and is a past pupil of Kildavin NS. Ciara is the daughter of Mary and John and previously attended Clonegal NS.

“They are all quiet, unassuming girls – understated and all-rounders. They would be as sporty as they would be academic, and all good mixers,” she said.

“All three were surprised by their results; there wouldn’t be any air or graces about them.”