The group, which comprises 19 members, has been busy in the last year with 187 callouts.

The volunteers respond to incidents of chest pain, cardiac arrest and choking and are dispatched by the National Ambulance Service.

The group has grown strong in a short period of time, having received great support from the people of Carlow.

“We receive very little funding other than local authority grants, so the donations from the public have helped us to purchase four defibrillators and training equipment. The public has been phenomenal for us.” 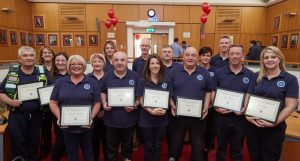 Members of CarlowTown Community First Responders who received certificates of appreciation to mark the group’s first anniversary, at the offices of Carlow Council Photos: michaelorourkephotography.ie

At the anniversary reception were CFR Ireland chairman John Fitzgerald and Donal Lonergan, community engagement officer for the National Ambulance Service in the southeast. The group held a demonstration of CPR skills at the reception.

The local first responders have had undeniable impact since the group was formed, with Mick Dooley and cllr William Paton playing key roles in its establishment.

The group regularly holds demonstration days. One Carlow man, who observed a demonstration day at Fairgreen Shopping Centre, would later use what he learned to assist a family member who had a cardiac arrest.

In addition to their medical intervention, there is also the calming effect that volunteers have when they arrive at the door of someone in need.

“We are there to reassure and to help them,” said Richard.

The group currently provides cover in Carlow town from 9pm on Friday evenings to Sunday at 9pm.

Typically, three or four volunteers are on call at a particular time and all will be notified of an emergency. They will each carry a defibrillator.

The group hopes to expand its service to cover a full week and is on the hunt for new volunteers. Training is provided over a four-week period.

Richard said the role of CFR suits someone who is outgoing – a team player – who is willing to help others and give something back to the community.

The group welcome all newcomers, especially those who have already been trained in CFR or anyone who has completed the HeartSaver course.

The group also hopes to encourage businesses that have defibrillators to make them accessible to the public 24/7.

Currently, only two defibrillators in Carlow town are located in external cabinets – at St Joseph’s NS and Visual.