A HALLOWED set of pipes which were owned by Planxty’s Liam O’Flynn have been passed on to the talented hands of a young Carlow musician.

Colm Broderick (20) was recently presented with the uilleann pipes by Píobairí Uilleann, the association of uilleann pipers.

The pipes, crafted in 1936, were last in the hands of Liam O’Flynn. O’Flynn was known for his solo work and his music with Planxty. He also recorded with Mark Knopfler, the Everly Brothers and Emmylou Harris. 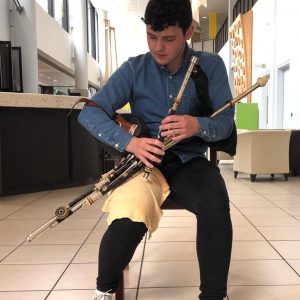 Liam passed away last year and bequeathed his pipes to Na Píobairí Uilleann, who then chose Colm to carry on the tradition of this beautiful instrument.

Colm is an All-Ireland winning piper and a member of north Carlow Comhaltas Ceoltóirí Éireann.

In recent times, he taught and played music in the St Louis Tionól Festival in Missouri, USA in April and the Willie Clancy Festival in Co Clare in July.

“Liam Ó Flionn was my favourite piper,” Colm told The Nationalist. “If I was listening to the pipes, he would be my go-to. I would always listen to his recordings. It’s a huge honour to play his instrument.”

Colm described the sound from Ó Flynn’s pipes as beautiful and it reminded him of the Planxty sound.

The Carlow town musician is a former pupil of Presentation College school and is going into his second year of studies at Mary Immaculate College.

The pedigree of these uilleann pipes is extraordinary. They were made by legendary piper Leo Rowsome in 1936 for the renowned musician Sean Reid.

Reid first passed them on to the illustrious Willie Clancy and it’s understood Ó Flionn had sought out these much-desired pipes.

The appeal of the uilleann pipes for Colm is multi-faceted.

“One thing that really appeals to me is that they are Ireland’s only native instrument. Other traditional instruments came from somewhere else, but these were developed and made here,” he said. “The sound of them caught me from the get-go as well. It was the sound of them that got me into pipes.”

The Carlow public will be able to get a first-hand of experience of this special instrument as Colm is planning to organise an event in Carlow as part of international uilleann piping day on 2 November.