Tullamore had beaten Baltinglass in last year’s Barton Cup final and given the club’s size it was a real David versus Goliath affair. The Provincial Towns Cup is a singles matchplay Leinster branch GUI event aimed at 9-12 handicap golfers.

Teams enter from all over Leinster excluding the Dublin area (where an equivalent competition, the Metropolitan Cup, is run). Each team consists of nine players; all matches are played off scratch on home and away basis. The final is played over two legs, home and away.

After the first leg Baltinglass trailed by four matches to five. The first team to 10 would seal the victory. With a mixture of youth and experience on the team, four of the panel are under 16 and 14-year-old inter-pro TJ Deering was chosen to go out first.

In a cracking match, TJ just came up short where he was beaten on the 17th, 6-4 in favour of Tullamore. GAA legends Ned Cremin and Bryan Kilcoyne won their matches on the 13th, 6-6! Kevin Lord was up next, on the 16th tee he was 1 down but he got up and down from an almost impossible angle to win the hole. He then hit a drive and wedge into the 17th to win it and he parred the last to get an unlikely and well-fought point; 7-6 to Balto. 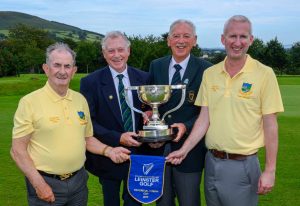 Nathan Geraghty and 13-year-old Neil Patterson win their matches 3 & 2 to make it 9-6 in favour of the west Wicklow club. While Niall Doogue was winning his match on the 15th Michael O’Neill was closing out his match on the 18th. In the final game Sean McCormack was playing in a very tight match and was called in on a final score of 11-7 as the celebrations began.

The scenes of joy and excitement around the club that evening will be remembered for a long time. Team managers Fergal Doogue and Sean O’Connor accepted the cup on behalf of the team and presented it to the club captain Martin Hennessy.

Baltinglass only won this competition once before, in 1985. They were beaten in finals in 1937, 1987, 1988 and 1989. In the previous rounds the Baltinglass team played Borris and a nail-biting match against Kilkenny. In the quarter final they beat the winners of the competition in 2017 and 2018: Enniscorthy.

In the semi-final they faced the victors in 2016 Wicklow GC in miserable conditions. There are several links between the 2019 team and the 1985 team. Bryan Kilcoyne played in both finals and also had time to captain the Baltinglass football team to a Leinster football final that year.

Baltinglass have played Tullamore in our matches, two major finals over the last couple of years and all matches have been played in the true spirit of the game. The other members on the panel were father and son Colm and Eoghan Cooney, Tommy Keogh and Bernard Bowes. The dedication of the squad of players has to be admired for the amount of practice they put in at home and all the times they travelled to the away courses to get familiar with the lie of the land. Victories like this don’t come around very often as the last time the club won a provincial pennant was 1993. It was a very proud day for the club.