LEIGHLINBRIDGE driver Richard Kearney confirmed his position as one of the top racers in Ireland by winning the Northern Ireland Formula Sheane Championship in Co Down last weekend.

The series consists of six races up north which count towards the overall championship.

“The Formula Sheane Championship is primarily a southern Ireland championship but we hold six rounds up north,” Richard explained.

With one piece of silverware already in the bag, Kearney, who followed his father’s footsteps into the sport, is hoping to defend his Holmpatrick trophy (the second most prestigious trophy in circuit racing in Ireland) and win the overall Formula Sheane championship, a combination of the southern and northern rounds, in a couple of weeks.

“We’ve won 90% of the races this season. The main championship concludes in two weeks’ time. I have a 15-point lead with 40 points to play for so hopefully I’ll have the main championship wrapped up on the Saturday evening, before the Holmpatrick Trophy meeting on Sunday.” 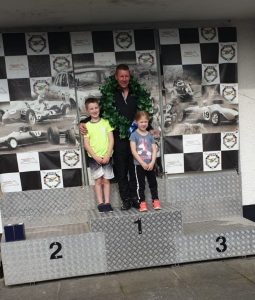 Richard Kearney on the podium with his children

Kearney explained the significance of his success.

“Normally, any single seater racer would have come from a go-karting background of some sort. I didn’t have that luxury so I had to learn pretty quickly. This would be my fifth season in Formula Sheane so to be winning races and championships so soon in my single seater racer is pretty amazing and pretty unheard of.

“My main contender in both championships is a guy called Brian Hartey. He has a record of single seater wins in Mondello, somewhere around 155 wins and he has 11 championship wins in a career spanning over 30 years.”

“To the untrained eye, the car looks like a small scale Formula One car. It has a rear wing and a front wing with big tyres at the rear and small ones at the front. It’s a 150-brake horsepower K series engine but the car is less than 500 kilos so the power it has to race is fairly phenomenal. The Kirkistown course is the fastest circuit we compete in and the PSNI have caught us doing 148mph.

“Every car is the same within reason, except for the colour scheme, so it’s down to driver skill with all the cars being equally matched. It’s relatively inexpensive compared to other disciplines. Anywhere near €7,000-€9,000 would get you on the grid in the Formula Sheane. In other disciplines, you’re looking at €30,000-€50,000.”

Kearney does admit however, that it is more dangerous than Formula One.

“You’re probably safer in a Formula One car, we don’t have a halo like they do. Me as a driver, I don’t see the danger but I have had a couple of accidents over the years where I’ve lost a wheel. You get two cars colliding and one car goes over the top of the other. Your head is exposed to the elements but we do wear helmets, fireproof underwear, fireproof overalls, gloves, boots and we use a hands device which protects our necks in case of an accident. I have seen accidents happen but never anybody seriously hurt or killed.”

Two out of three ain’t bad for Graiguecullen