HISTORY has just been made in Carlow College with the appointment of its first-ever female secular vice-president.

Helen Maher, who is originally from Nurney, Co Carlow has been working in the college for the past ten years and has worked closely alongside its president Fr Conn Ó Maoldhomhnaigh since his appointment in 2015. After a history of 200 years of clerical leadership of the college, Helen told The Nationalist that it was “an honour” for her to be made vice-president.

She was deeply involved in developing the college’s relationship with the outside world and, in particular, with the Visual Arts Centre and IT Carlow. Indeed, she was one of the authors of a historic Memorandum of Agreement, which the presidents of both institutions signed, professing their commitment to strengthening ties with each other. 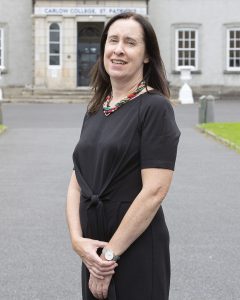 “I’ve been very committed to the development of the college and its future, but I was still surprised (by the promotion to vice-president) because it’s not traditional,” she said.

Helen also said that her promotion was an indication of the future direction of the college, as the former seminary has become fully inclusive. She also helped in changing the governance of the college, which was founded as a seminary, and has been instrumental in bringing about other fundamental changes after carrying out a survey of what its staff and management sees itself moving to in the future.

Helen has also helped to redesign some of the college courses, while she also developed what is now the social, political and community studies course, which she is now the director of and lectures in.

She’s currently doing a PhD in gender studies and is a coordinator for strategic projects and collaboration in the college. Her main interests lie in gender studies, human rights and social justice.

She said that while she acknowledges the role of technology in society and the beneficial changes that it can bring about, she believes that classical and traditional subjects such as philosophy, theology and sociology are as relevant to today’s world as ever.

“The older disciplines have a valuable place in our society and how we see ourselves. We ask questions about the type of world that we live in and how we as human beings contribute to that world. If you don’t stop and ask what humanity is about, we’re in danger of not serving ourselves or our planet properly,” she asserted.

She acknowledged the important role that her parents Mary and James Maher had in her education, as they supported her decisions in travel, working in society and staying in academia.

Having attended school locally at Presentation de la Salle, Bagenalstown, she completed an arts degree in UCD, after which she did a masters degree in peace studies at Bradford University, the first course of its kind.

She’s a firm believer in education and still likes to lecture in Carlow College.

“Education is about opening door-after-door. There are moments in learning that are life-changing. I tell my students not to rush through their studies, but to enjoy it and recognise the privilege they have of learning. I ask them to take a moment and let those doors open and then to walk right through them,” she concluded.