The lyrics of the Nina Simone classic Feeling Good come to mind following the almost 200 people who rose early to take part in the national dawn walk recently.

“We are thrilled, delighted,” said coordinator Michael Cahill. “People were saying how special and memorable it was. There was such a friendly atmosphere at it. The weather was absolutely fantastic, about 20 degrees. The trail was lovely, the river was beautiful.” 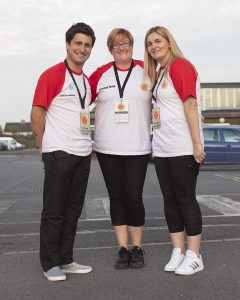 A final tally is not yet known, but several thousand is thought to have been raised for its charity partners LauraLynn Children’s Hospice, CMRF at Crumlin Hospital and for local cancer support centres across Ireland. After the walk, a remembrance ceremony was held with bishop of Kildare and Leighlin Denis Nulty, Kathleen Chada and Michael Cahill taking part.

It was a simple but emotional ceremony, which touched the hearts of many in attendance, including those who had lost loved ones who went through their own cancer experiences.

Michael recalled that you could hear a pin drop during its duration.

He said what will stick in his mind is the goodwill of all who took part, including the 25 volunteers who ensured everything went smoothly.

“Everyone was in such good form for 5am in the morning, including the committee. That always gets me, how Irish people are so willing to give and volunteer to help out … there was a lovely, lovely atmosphere.”