County’s role in burning of the Custom House captivates audience

LOCAL history enthusiast Paul Curran delivered a fascinating talk about the burning of the Custom House in Dublin during the War of Independence and the role that people from Carlow played in the event.

The four men involved in the attack were Michael Watchorn from Leighlinbridge; James Doyle from Hacketstown, who was already a Dublin 1916 veteran; Jack Grace, from Tinnahinch; and commandant colonel Thomas Kehoe from Rathnagrew.

“The incident, which took place on 25 May 1921, was the last and final throw of the dice by Irish Volunteers against the British empire,” Paul explained. “Soldiers and police of the British empire were far better manned, equipped, trained and resourced than the Irish Volunteers, though the Irish were fighting on their own home ground and in guerilla-type attacks. Dressed as civilians, they could fire off a few shots and mingle among the crowd, disappearing from sight. The British had a terrible reputation by the general population, particularly the Black and Tans and the even more hated Auxiliaries.” 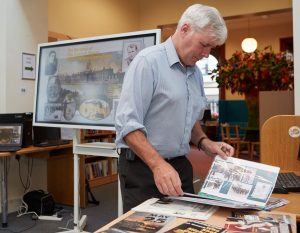 Paul Curran looks over his notes prior to his talk on The Burning of the Custom House 1921 and the Carlow Connection in Carlow Library as part of Heritage Week Photos: michaelorourkephotography.ie

The decision to attack the Custom House came from Eamon de Valera, who wanted Ireland to show the world that they still had some fighting spirit in them against Britain.

Paul gave the talk in Carlow library during heritage week in front of a captivated audience.

Tom Kehoe, a half-brother of commandant Thomas Kehoe, gave Paul some photographs to illustrate the talk. Tom brought along his brother’s Colt 45 revolver, which he had on him when he was killed in 1922. He also had several other items his half-brother carried on that fateful day, including a wallet, a crucifix, whistle and cufflinks.

Jack Grace’s son Liam was also at the talk, as was historian and columnist with The Nationalist Frank White, who has carried out a comprehensive amount of research into the War of Independence and beyond.

Paul invited his audience to participate in the presentation and so a lively and informed discussion took place among the knowledgeable attendees.