World silver for Eamonn as he sets his sights on Fenagh

COUNTY Carlow’s most famous man of the plough Eamonn Tracey has just scooped a silver medal at the world ploughing contest in Baudette, Minnesota.

He won silver place representing Ireland with an outstanding performance in the conventional class category.

Well wishes and congratulations have been pouring in from all corners of Ireland as news spread about Eamonn’s great achievement. His success comes just two weeks before the national ploughing championships, which take place in Ballintrane, Fenagh from 17-19 September. 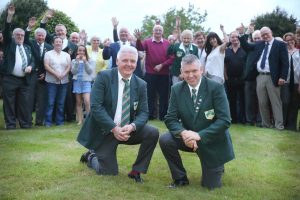 The mother and daughter team responsible for bringing the national championships to Fenagh, Anna May and Anna Maria McHugh, accompanied the Irish team members to Minnesota. They were fulsome in their praise of Eamonn and his teammate Co Wexford man John Whelan, who also secured silver in the reversible class.

“This is a fantastic win for both men and Irish ploughing as a whole. Since winning the nationals last year, the men have been working hard on preparing for the worlds in the USA and all their effort have paid off,” Anna May McHugh, managing director of the National Ploughing Association, said. “They have done their country extremely proud. Congratulations and a very well done to both.”