THE Glenside Lounge was packed to the rafters for the recent fundraising table quiz organised by Killeshin Wheelers.

The quiz was part of a fundraising effort in tandem with club’s annual Achill to Killeshin cycle.

Over 40 tables came together for the quiz night, with more than €2,500 raised for the club’s chosen charities – St Clare’s Hospitality Food Kitchen and the Irish Motor Neuron Disease Association. 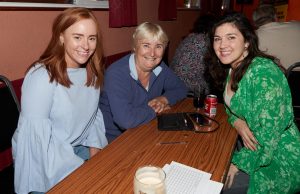 Debbie Mullaney, Vonnie Bolton and Michelle Phelan at the Killeshin Wheelers fundraising table quiz in the Glenside Bar and Lounge ahead of their annual Achill to Killeshin Cycle Photos: michaelorourkephotography.ie

John Collins was quizmaster, while the combined effort of the hard-working committee – with special mention for Dan O’Connor and Bea Ronan – ensured the night was a huge success.

The annual cycle, which took place on Saturday and Sunday, saw 30 club members cross the country from west to east for the event, with another 30 joining from the club’s ‘Couch to 50k and Beyond’ group for the final leg of the journey home.

Now in its fourth year, the cycle is held in memory of former club member and Killeshin man Mark Attride.

When the final figure from the quiz and cycling sponsorship cards is tallied, it is hoped that more than €12,000 will be divided between the club’s two chosen charities.

New scheme for creation of native woodland on public land