Budget 2020: Donohoe expected to work on assumption of no-deal Brexit 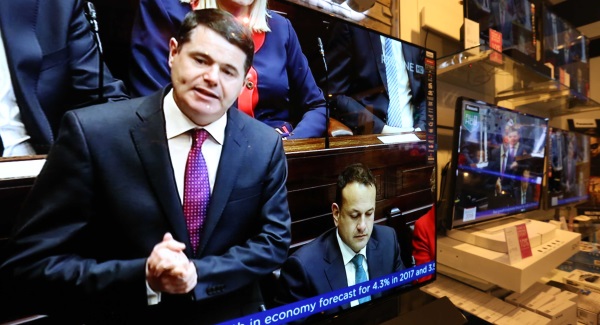 The Cabinet will hear today whether this year’s budget will be based on a no-deal Brexit.

The Finance Minister will outline the options open to him as October’s budget draws closer.

Paschal Donohoe is due to deliver his budget speech on October 8.

Already Mr Donohue has indicated that he would have to make a judgement call on whether he would have to frame it on the basis of Britain crashing out of the EU without a deal or if a deal is secured.

Either scenario would have implications for the country’s tax and spending plans.

Minister Donohoe will brief Cabinet Minister’s today on the likely approach he will take next month.

It is expected he will work on the assumption of a no-deal scenario.

In that event, tax cuts could be ruled out and an increase in borrowing could be on the cards.

Meanwhile, the Government has been warned that further “slippages” in government spending on health and social welfare could overheat the economy.

The stark warning comes from the Irish Fiscal Advisory Council (IFAC), which says that while the domestic economy is performing well, excess spending this year could force the Government to rein in plans for Budget 2020.