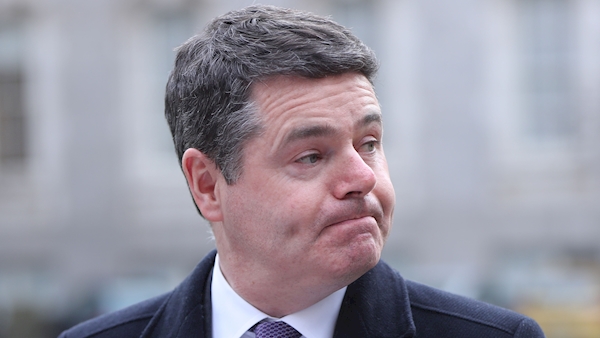 The Government has agreed that Budget 2020 will be prepared on the basis of a no-deal Brexit.

The tax and spending plans for next year are due to be announced on October 8, just weeks before Britain is due to leave the EU.

Finance Minister Paschal Donohoe said the decision to plan based on no-deal is to give certainty to people across the country and businesses in vulnerable sectors.

Mr Donohoe has confirmed any tax changes will be “minimal” and although there will be a social welfare package in the budget, it will be scaled back compared to previous years.

Up to €900m in capital spending will still go ahead and the Minister said this will help to protect the economy.

Speaking after briefing the Cabinet in Dublin, Mr Donohoe said: “Assuming a no-deal Brexit ensures the Government has the necessary resources at its disposal to meet the impact of this exceptional challenge whilst preserving the longer-term sustainability of the public finances.”

Mr Donohoe also said that increases will be made to social welfare payments that will target the most vulnerable.

He added: “We will have a social welfare package in the budget but it will be different in scale to previous years.

“We will also have the provision in place to increase social welfare supports and funding due to a temporary increase in unemployment.

“We will also, in that phase of the budget, introduce timely, targeted and temporary measures for the sectors of our economy that could be, and will be, affected by a no-deal Brexit taking place.”

Mr Donohoe said he will do everything to keep the economy buoyant in a no-deal scenario.

He said: “The €900m of additional capital investment will be preferred for next year, because if we do get into dealing with a no-deal Brexit, I want to be going ahead with public projects, I want to be co-funding private projects that will be employing people that otherwise might be at risk and that will be bringing work into parts of our country that might be particularly affected by a no-deal Brexit.”

In what he described as a “safe and careful budget”, Mr Donohoe said it will focus on ensuring the government has the resources it needs to be ready for a shock at the end of October when the UK is due to leave the European Union.

The Minister said the threat of Brexit means personal tax cuts are off the table.

Mr Donohoe said: “There are many who would argue, given other issues and pressures that we have to deal with and given the fact that we have an economy that’s still growing and is doing so well, that there is a case and a need to make further personal tax reductions before Brexit.

“I’m not going to do that, I am going to make a set of very safe choices in relation to taxation.”

He added that while there are often cases and the need to make personal tax deductions, he was not going to take that decision for Budget 2020.

“I want to ensure that we are maximising the resources that are available to help citizens, families and communities that could find themselves dealing with real change as a result of a no-deal Brexit taking place.

“I will have to make changes in our personal tax code to deal with a potential change in the minimum wage.

Mr Donohoe said that while the government has committed to a budgetary package of 2.8 billion euro (£2.49 billion), it could go beyond that.

The government may have to put in place reserves to make more benefits available to those who become unemployed.

“That would have the case of moving it beyond the 2.8 billion euro framework but I’d emphasise that would only take place in the context of a no-deal scenario,” he added.

The Institute of Directors (IoD) in Ireland welcomed the Minister’s decision after its recent survey found that 89% of senior business leaders think the government should deliver a “conservative budget” in expectation of a no-deal Brexit.

The IoD is the membership body representing 3,000 directors and business leaders.

Maura Quinn, CEO of IoD, said: “Our latest director sentiment monitor survey shows that the uncertainty evident over the past 12 months has intensified in the last quarter and that business leaders’ optimism in the economy has dropped 31% year-on-year.

“The message is clear – Irish business leaders are worried and they want the Irish Government to take note and deliver accordingly in next month’s budget, which is just weeks before the current Brexit deadline.”