“GOD speed the plough”. The anticipation was building last week at the official launch of this year’s National Ploughing Championships at the festival grounds in Ballintrane, Fenagh.

300,000 are expected to come through the gates of the championships between 17-19 September in a celebration of rural of Ireland.

More than 300 ploughing competitors will take part and there will be 1,700 exhibitors, with taoiseach Leo Varadkar and President Michael D Higgins scheduled to attend.

“We hope it’s a celebration and everybody enjoys it,” said Anna May McHugh, MD of the National Ploughing Association. “We are confident of putting on a good show.”

Agriculture minister Michael Creed said the ploughing has a significant cultural influence, as it’s the place for not just rural communities but also those from urban areas.

“It’s an important display of the agricultural and farming community, but it does create that bridgehead between the farming and broader community.” 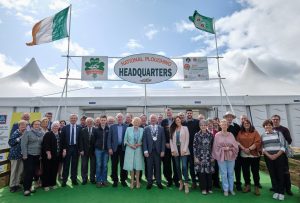 Cathaoirleach of Carlow County Council John Pender said the county was “thrilled and delighted” to be hosting the mammoth event.

Cllr Pender said the event is an “ideal opportunity to showcase the county”.

More than 100 Carlow exhibitors will be at the ploughing, while the county council’s Carlow Pavilion will showcase the county’s enterprise, education and tourism sectors.

“She has given such a commitment to rural life in this country; she should be running the country!”

He concluded with the line “God speed the plough!”

Chair of the Carlow Ploughing Association Eamonn Treacy spoke of his delight in welcoming the championships to Carlow. He said the branch had put its shoulder to the wheel to ensure all would be ready to go on Tuesday 17 September.

“It’s only when you are involved that you appreciate the amount of work that goes into it,” he said. “It has run like clockwork and that is due to Anna May and her team.”

Carlow has truly put its best foot forward in putting on the event. The support and co-operation of organisations and individuals, including gardaí, HSE, Carlow County Council, Carlow Fire Service, landowners, local residents and site workers were all acknowledged at the launch.

Ms McHugh rallied all those working at the site to do what was necessary to put on a great show.

Ms McHugh also asked Bishop of Kildare and Leighlin Denis Nulty and other clergy to pray for good weather and joked that if the rain falls, they won’t be allowed in on day-two.

New scheme for creation of native woodland on public land