Eamonn is hot favourite to retain his national title

WORLD-CLASS ploughman Eamonn Treacy is truly a man of the earth.

“Carlow soil is beautiful but unforgiving. It’ll show up every mistake, but that’s what makes it good for a ploughing match. If you’re not set up properly, the soil will show it,” Eamonn tells The Nationalist at the official launch of the National Ploughing Championships in Ballintrane, Fenagh on Wednesday.

Eamonn’s just fresh off the plane from the World Ploughing Contest in Minnesota the day before, where he scooped a gold medal in the conventional class and an overall silver for Ireland. He’s also won an astonishing three world titles – in 2014, 2015 and 2018 – and a record-breaking nine national titles in a row. Eamonn’s team mate in Minnesota was Wexford’s John Whelan.

“What a joy and pride that we took from them,” she said at Wednesday’s launch.

Agriculture minister Michael Creed described the achievement as a “fantastic success” and offered his congratulations.

In his address to the crowd on Wednesday, Carlow County Council cathaoirleach John Pender quipped that while the Dublin footballers might be looking for an historic five-in-a-row, Carlow’s very own Eamonn is now vying for a staggering ten consecutive national ploughing titles. 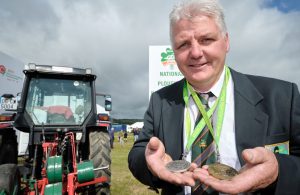 Eamonn Tracey with the silver and gold medals he won at the recent World Ploughing Championship in Minnesota Photo: michaelorourkephotography.ie

“I’ll be under pressure, especially since my own tractor and plough won’t be back from America on time. I won’t take it lying down, though! And it’s always nice to do well in your own county!” laughs Eamonn.

For the competition he’ll be using the tractor and plough belonging to his son Seán, an indication that the Treacy family are steeped in the tradition. Eamonn’s father John is a six-time runner-up in the world ploughing event, while his sons Seán and Steve also compete.

Ploughing competitively has brought him all over the world and he has friends in the global ploughing community. He says that taking part in competitions abroad allows him to see countries as they really are, and not how they’re packaged for tourists.

“These countries are beautiful. We go out into the true countryside and see what it’s really like, how the people really live. The USA, Canada and New Zealand were very enjoyable because they were more relaxing. There’s a pressure in Ireland, the way people live, but the farmers there were more relaxed and had time to talk,” he continued.

Ploughing competitively is in his blood, but his ability to do it so well is a gift. Winning is also a huge motivating factor and he’s as competitive today as he ever was.

“Being successful is definitely a great boost. I just love it. I don’t golf or take part in any sport, so this is my sport, my hobby. It’s all about the process – straight and clean lines and uniformity,” he pointed out.

What’s the secret of his success?

“If I had a euro for every time someone asked me that, I’d be a wealthy man. I put it down to a gift that I have. If I see a problem, I know how to fix it,” concluded Eamonn.