THE Carlow Vintage and Classic Motor Club recently made a presentation of €2,000 to the Carlow Branch of the Irish Wheelchair Association. The club, which was founded over 13 years ago, regularly makes donations to charitable organisations selected by club members and also supports similar clubs all over Ireland in their fundraising efforts.

The group also travel to shows in England, thereby promoting Carlow abroad, resulting in like-minded people from Wales making the trip to Carlow for the club’s recent annual show and prize-giving event in the Cental grounds on the O’Brien Road in August, which also attracted visitors from all over Ireland displaying their vintage and classic cars, trucks, motorcycles, scooters and stationary engines, with more than 300 exhibits on display. 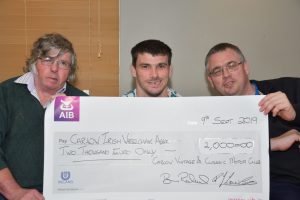 Billy Black, Aaron Quinlan and Alan Matthews at the presentation

Earlier in the year, the club organised its most successful family day and vintage display to date at the picturesque Duckett’s Grove, again attracting a massive array of vintage and classic motor vehicles and auto jumble stalls, which proved very popular with enthusiasts.

The Carlow Vintage and Classic Motor Club is one of the most active and progressive clubs of its kind in Ireland. Attracting a large membership from Carlow and surrounding counties, it organises outings to locations around the country on a regular basis. When possible, it also joins other similar clubs on their outings, which creates a good healthy social outlet. The club usually winds up the year’s activities with its annual Christmas party, which attracts a large attendance.

New members are always welcome, with membership due for renewal on 1 January each year. For more information, check out www.carlowvintageandclassicmotorclub.com